Boys like to dig.  I suppose I did my share of it when I was once one, and have done plenty since, but there is just something inside of most boys that make them want to dig in the dirt.  Grandpas are no exception.

The notion of buried treasure comes to mind.  Something inside of us wants to strike it rich.  When you get right down to it, good old fashioned greed is probably the culprit.  Just ask those poor saps who fling a dollar down at the quick-pick occasionally to buy a lottery ticket and you’ll hear the same notion—the idea of something for nothing.

A few weeks ago my dad and I, along with my nephew and my two youngest boys, set out to find our buried treasure.  Now I’ve spent most of my life hearing tales of those who have been to the only diamond-producing site in the world that is open to the public, but I’ve never actually been there.  The Crater of Diamonds State Park, located in Murfreesboro, Arkansas, a couple of hours from home, was our destination.  We had digging on the brain, and figured our boys did, too.

On a warm Sunday afternoon, we joined up, loaded our treasure hunting tools, and set out to find some diamonds.  We didn’t particularly want to spend all of our time driving there and back in the same day, so we had planned in advance to drive down the day before our expedition, stay in a hotel, and hit the ground running early the next day.  Maybe if we got there early we would beat the crowd to “the big one”!

After leaving the river valley and enjoying a leisurely drive through the Ouachita Mountains, we arrived in diamond country, checked into our hotel, and focused our mind on one thing, eating.  We had predetermined that pizza was the food of choice, and with all of us famished we invaded the local Pizza Hut.  Soon our starving appetites were being fed with loads of cheese, meat, and dough, and it wasn’t long before we had certainly had our fill, and then some.

Arriving back at the hotel, the boys, who had probably not overindulged as much as Dad and I had, were giddy and anxious to hop in the indoor pool.  I think Dad and I would have probably been content to lay on the bed in our grease-overdosed misery, but we went along for the ride.  We all suited up and headed for a swim, which the boys enjoyed thoroughly.

With bellies full of pizza and worn out from our swim, we all settled into the room with visions of diamonds on the brain.  When we asked the boys what they would do if they found a diamond, they all insisted that they would keep it.  I have to confess that my greedy mind was contriving a picture of me sitting across from a jeweler in a nice suit, watching him count out stacks of money as I cashed in my large gem.

On Monday morning, bright and early, we gathered up the boys and our overnight gear, loaded up on breakfast (as if we needed it), and headed down the road.  As we drove toward diamond country we passed through the thriving metropolis of Hollywood, Arkansas.  While it was not exactly overflowing with the glitz and glamour of the Hollywood that most think of, it seemed ironic that we would be passing through Hollywood on our road to riches. 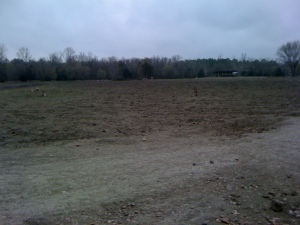 Arriving at the Crater of Diamonds state park, we were amazed at the crowd of prospectors that had beaten us to the scene.  Although we had anticipated warmer weather, there was a bit of a nip in the air that sunny morning, along with a steady breeze.  We all gathered a load of buckets and shovels and walked up the hill to the entrance of the “mine”.  Greeted by a friendly staff in a very nice visitor’s center, we looked at the diamonds they had on display and got a good picture in our mind of what we were looking for.

Down the hill from the visitor’s center was another building where a park attendant was giving a history lesson about the volcano that had blown up there 95 million years ago, which is what created the scattering of diamonds throughout the park.  I wanted to interject to let her know that that was impossible, because according to biblical history, the earth had only been here for about 6,000 years, but I held my tongue.  She did a grand illustration of how to use a set of screens to dry sift for diamonds, as well as how to sift them through water to really get to the good stuff.

With shovels, buckets, and a set of screens we rented from the park, the five of us headed to the diamond pit—a 37 ½ acre field that looked as though it had been lacking of corn seed for quite some time.  With plenty of dirt to dig in, we laid claim to a spot and commenced to excavating.  We dug and sifted, sifted and dug.  Somehow, we didn’t hear any loud shrieks of “eureka!” but we kept on digging.  Not long into our digging venture our five prospector team had diminished to two—me and Dad.  The boys had become disinterested in diamonds and soon began wandering up and down the rows of dirt seeking other forms of entertainment.

A few hours into our adventure we had found nothing beyond of a bucket full of fine gravel.  The lady had told us during the training session that this gravel was likely the source of a good diamond, especially if sifted through water.  So we set out to wash our gravel and find the big one that way.  A huge station of sifting troughs were set up near the field, and we stood shoulder to shoulder with some other folks, sifting gravel in cold water as a stiff breeze blew.  The cold water and breeze heightened our desire to get done and get out of there.

A trained specialist was ready to review our potential finds as we exited the park.  We had our doubts regarding the specimens we had picked out, but we had them checked nonetheless.  The lady confirmed what we had suspected—we had found nothing more than a few bits of worthless rock.

Cold and hungry, we left the park around lunchtime as hoards of other visitors/prospectors headed for the dirt pit.  They had not yet discovered the joy of digging as we had, but they surely had a good afternoon that was starting to warm up for them.  Our team, on the other hand, was ready to get out of there.  With souvenirs in hand that Grandpa had purchased for the boys inside the visitor’s center, they were quite happy.  We grabbed a snack in the van and then headed down the road homeward.

Not long into our journey home we found a local greasy spoon and had some lunch to top off the snack we had already eaten.  With our appetites for food, as well as digging for treasure, satisfied, we headed back north toward home.  Our journey had not produced a grand treasure, but the real gem of our trip was the time that we got to spend just hanging out together.